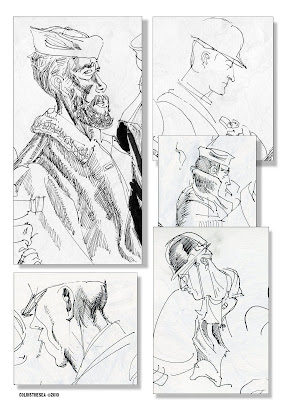 Today in Navy history ...The rate of Chief Petty Officer (1893) and the US Naval Command in Vietnam (1966) were established. (Thank you US Navy Calendar). April Fools!!!!!!! These drawings have nothing to do with any of that. (And speaking of Vietnam I noticed I got a visitor from Hanoi!!!!!!!!!! Awesome! Attention visitors from far-flung places: Please leave a comment, even if it's just "Hello"!)

I didn't get a job this morning, so I'm killing some time before I attempt to put in some laps at a pool with blood warm water. These are some old sketches. The bearded sailor is from a collection of photos from the WWII-era USS West Virginia (after it had been rehabilitated, post- Pearl Harbor). Apparently the Captain allowed them to grow beards to foster a "Mountaineer" espirit de corps. (I love those old school deck jackets, btw). One of the other sketches might be a Marine, but that's "maritime" in my book. I'm definitely going to do some oil painting later today...Update on that will be forthcoming.

And...I also have to say that the April photo in the 2010 Jack Tar Calendar is much cooler than the one in the Naval Historical Society's. Just sayin'...