"Captain, it is I, Ensign Pulver, and I just threw your stinkin' palm tree overboard!" 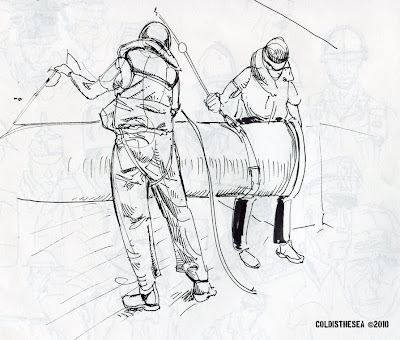 You'll never guess what. Go ahead. Guess. C'mon. G'head.
Yes! You got it! I found a website for the ship (the USS Virgo) that was the inspiration for Thomas Heggen's USS Reluctant of "Mister Roberts" fame! It's pretty incredible I think. Apparently the USS Virgo saw service until 1971 when it was decommissioned. If you haven't read the book, or seen the movie go run to your nearest bookstore or get it from the Netflix. Truly a great novel and a great film.

Anyways. I was poking around on the Virgo's crew photos section where I found some very cool unrep photos (check out the wooden deck!). I really wanted to do this as a watercolor- and I just might at some point- but I am seriously, seriously, under the weather (never get on an airplane with a head cold). So, even though even though I've been lolling around at home watching my favorite cartoon sailor battle triads, mad unsurrendered Tsarists and cossacks (Red and White) in Manchuria, I haven't had too much energy to do more than this pen sketch. I really want to get back to the watercolors or the oils, but ...I don't have the juice right now. So. Enjoy.