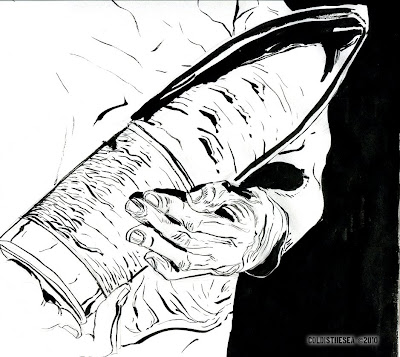 For those of you who haven't seen it, "The Battleship Potemkin" is the story of a Russo-Japanese War-era Russian Navy crew who mutinies after their officers attempt to punish them for not eating maggot infested provisions. One of the principal mutineers of the mutiny links their plight to the burgeoning political upheavals in Russia, exhorts them to rise up and...the action ensues. It's a true story- and as a side note, the last survivor of the crew lived to be over 100 and started a fish and chips chain in Ireland.

I chose this shot to illustrate because it was so striking. Towards the end of the film the Potemkin is met by a squadron of Russian ships sent to intercept it. The Potemkin and the squadron train their respective guns on each other and through signaling, the Potemkin attempts entreat their brother sailors to join them in revolution. The tension is extreme as the Potemkin begins to pass through the squadron, during which there is a shot of a sailor holding a scarred shell, ready to load it and commit fratricide. I won't spoil it (any more than I have), but it was a fascinating film- albeit one made solely for propaganda purposes. Stalin actually ordered the film to be shelved when he decided that he didn't want to be in the business of encouraging foreign navies to revolt.