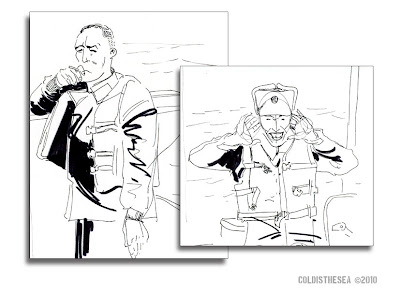 Is it me, or is the lack of news coverage surrounding the sinking of the Cheonan a little unsettling. I mean...a South Korean naval vessel is sunk by a very mysterious explosion in contested waters and the story is buried in all major news outlets.

Of course, there's a practical reason to all of this. If South Korea makes it an "issue" the potential for the escalation of violence (that could consume the whole peninsula) is very real.

Once, a long, long time ago in an international affairs school far, far away, I found myself writing a scenario for the invasion of South Korea by the North as part of a midterm exam. One of my classmates was a former ROK Special Forces soldier with whom I was friendly.

"Kim," I said, "What would you do if you saw a whole bunch of DPRK soldiers coming south towards the DMZ?" His face lit up into wide smile, and he didn't hesitate to answer, "I would run."

The sketches above are of North Korean sailors patrolling near the South Korean border. The source photo was taken yesterday. I imagine that the guy mugging for the camera and the one smoking his cigarette warily looking at the photographer both exhibit the same kind of attitude: They know what happened to the Cheonan...

Let's hope this doesn't go nuclear. I'm with Robert Farley at Information Dissemination, I'm betting it's just going to be classified as an accident.