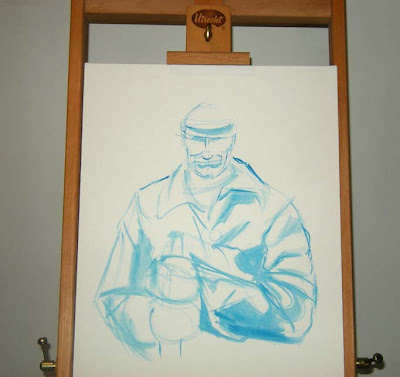 I've started my first oil painting since college. As my first subject, I decided to paint a sailor from a group photo of Destroyermen from the USS Olympia landing party that went ashore during the beginning of the North Russia Expedition. 50 sailors (and a couple officers) went on an incredibly complex mission to Archangel which I believe was to safeguard the Czech Legion. The Czechs had been allies of the Czar and were suddenly unwelcome (and trapped) in Russia after the October Revolution. Their story is actually very fascinating, as they criss-crossed Russia on trains trying to fight their way out.

So. I'm oil painting again. It's every bit as challenging as I remember it, especially in my ill-lit and unventilated basement. (Let's hear it for odorless turpentine, shall we?) We'll see how far I get.

Oh yeah! By the way, I was told that gCaptain was going to feature my Liberty Cuffs piece tomorrow on Maritime Monday. gCaptain is a fascinating and informative site (as well as Casco Bay Boaters) which you should make part of your daily maritime reading. Check 'em out!