Anyone have $30 Million I can borrow? 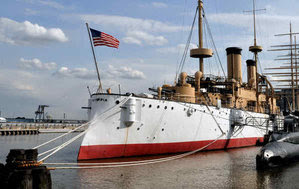 ...I'll pay it back after I take care of my student loans.

....But, on a serious note, one of the beloved heroes of my never-to-be-finished "Matlow v. The Bolsheviks", the USS Olympia, is going on sale. Apparently Philly's Independence Seaport Museum can no longer afford to maintain her. Article is here. I can't imagine that the ship that fired the first shots in the Battle of Manila Bay (not to mention that they landed the first American combat troops on Soviet soil) will be going to the ship-breakers yard...but you never know. If you're reading this and have the liquidity to save her, PONY UP ALREADY. I guess this means the Wife and I are going on a road-trip to Philly sooner than expected...