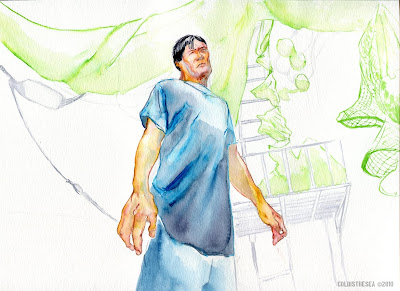 One of the reasons I read a lot of sea literature- and why maritime history and culture is interesting to me in the first place- is because of the type of people who take to the sea. Generally, in any good sea story (real or imagined) there is adversity and a person who willingly or not, has to deal with it. This is a portrait of just such a person. Meet Thuong Nguyen, a man who's been through so much adversity he has "Life is Difficult" tattooed on his arm.

According to the article, Thoung escaped Communist Vietnam in a small boat "crammed with three dozen others for 11 days. Little water. Vomiting. People praying to Jesus and Buddha. You cannot imagine.". Upon reaching America he worked in a battery factory, migrated to Louisiana, worked with a relative as a shrimper and eventually saved enough to buy his own boat. Katrina wiped out his home (and what I find most poignant- destroyed irreplaceable family photos from Vietnam) but not his boat. He rebounded from Katrina, returned to shrimping and now of course, is at the mercy of the BP Gulf of Mexico Oil Spill which has put his livelihood on hold.

If all that doesn't make a compelling sea story, I don't know what does. If you haven't followed the first link in this post, go to the New York Times and read Thuong's story. To me, this disaster is yet another in a long running catalogue of environmental calamities that seem to lose their front page cachet too quickly. In a global context, it seems like a little thing to wish that hopefully the damage will be squared away and Thuong can get back out to sea as soon as possible.