Requiem for a Seabee 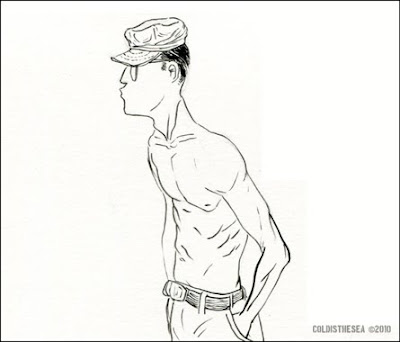 My Great-Uncle, spinner of self-effacing, humorous tall tales passed away today after a long fight with the many complications that come with old age. The son of immigrants who (literally) escaped from Tsarist Russia, he was a WWII Seabee and Pacific Theater Vet, yet he was not a very Seabee-like Seabee: he wasn't good with his fists, didn't have a tattoo ("But I thought if I ever got one, it would be that Bee character!") and he avoided strong-drink and loose women.

However, he did have some very sailorly qualities:

He often made it a habit to hide from his Chief in order to find a safe, dry place to take a nap. He traded his beer and cigarette allotment that he didn't want for various and sundry items that he did. He also enthusiastically engaged in the thriving business of decorating combat knives for sailors who wanted to appear a little more salty.

Most importantly though, by crossing the Equator on his way to war he endured a centuries old ritual and was formally initiated into "the Mysteries of the Royal and Ancient Order of the Deep" earning the title of "Shellback". Some men serve for an entire career in the Navy and never earn that honor.

Though he wasn't one of those Seabees that went right in with the first wave, he did have a couple of close shaves (aside from those times where he was sniper-bait while constructing oil and water storage tanks):

Once, a newly minted Ensign "accidentally discharged" his shiny new .45 perilously close to Uncle Art's head. The terrified Ensign offered to do anything for Uncle Art as long as he didn't tell. Uncle Art said "I didn't really need anything, so who was I going to tell? What was he going to do for me, send me home?

Another time he was at the end of a dock made out of floating pontoon sections when he heard the unmistakable sound of a Betty. It quickly appeared and started strafing, making a run towards the ship being unloaded at the end of the dock. As Uncle Art was running for safety he said that he started thinking about a gap somewhere between two of the pontoons. "I couldn't remember where it was and then... I found it." He broke his leg, but fortunately that was the extent of his injuries.

And finally (in transit to somewhere) his C-47 transport plane lost an engine (and for a brief time, both of them- one on fire) and was forced to land on Peleliu. When exiting the plane he looked at the sweat-soaked pilot and said, "Boy, I'm glad I wasn't in your shoes!"...

As I sat with him at his nursing home over the last year or so we chewed the fat, he cracked a lot of "groaner" jokes and I became the recipient of many sea stories and assorted family gossip. He was one hell of a guy and I'll miss him.