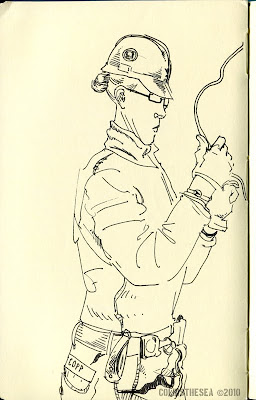 I had a couple minutes in a room alone with a computer today at work, so I decided to do some sketching. Unfortunately, I didn't have a lot of time (I didn't want to completely wolf down my sandwich just to draw) so I didn't get as much "information" into this one as I would've liked.

Obviously, I'm still thinking about my Great Uncle (his funeral was well attended, poignant and appropriately funny). Given that he was (happily) surprised to hear that the unit was still active (understandably he didn't pay much attention to military stuff after he was discharged), I wonder what he would have thought if he knew the Seabees went coed...

Regardless, this is a portrait of a Seabee putting in some wiring in, in a new facility at Camp Krutke, the evolving Seabee camp adjacent to Camp Leatherneck. The Seabees are adding a lot of value to the COIN effort with local construction projects, so it's only natural that they're building their own digs in Helmand. (I do think it's interesting that they built the base for the Marines first...but I guess you can't have development if you don't have security first...). If you're interested in the efficacy of COIN in Afghanistan, take a look at this article. Now, I'm a hardcore COINdinista myself, but the leaked memo in that piece gave me a moment of pause. Anyways. It's a conversation for another day.

(Also, there's a great piece on Afghanistan here by a soldier/contractor who spent 6 1/2 years there. Scroll down to the contents and click on "Building Bridges". It will enlighten you as to the difficulty that anyone- especially our Seabees- have doing development/construction work in Afghanistan.)