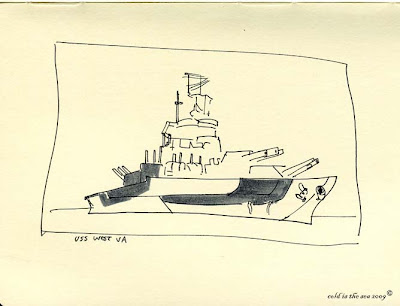 Kind of an underwhelming offering today, but I barely had any energy to begin with- and I barely have any energy now. I did this during a short break today.

The USS West Virginia had an interesting "life" from Pearl Harbor onwards. You can see her burning in some of the most iconic shots of the attack, and she was resurrected from the grave to fight again and started getting her licks in during the battle of Leyte Gulf. You can read all of this on her Wikipedia page. As you can see I chose to draw her resplendent in her dazzle paint. (Check out this one too.)

There are also some little known horrifying facts about the "WeeVee". Did you know that after the WVA was raised, three dead sailors were found in a sealed, airtight room with ration packages, water and a marked calendar indicating that they'd survived up to the 23rd of December? Horrible. Horrible way to go. You can read about the salvage efforts on the WVA in Edward Raymer's excellent memoir, "Descent into Darkness".

Anyways, that's all I've got for today.