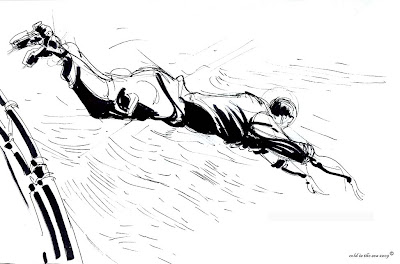 This sketch is from a photo I found here. During a transit of the Red Sea, two French Foreign Legionnaires aboard the Louis Pasteur heading from 2 years of fighting in Indochina towards a combat tour in Algeria decided to jump ship. The story was written by a crew member who was a witness to both escape attempts made by these poor bastards. I guess they really didn't want to go...Interesting that the French needed to shuffle troops from Indochina to Algeria. But then again, they don't call it "the Legion of the damned" for nothing.