A Man and his Dog (or is it the other way around?): Stumpy and the Auld Sapper 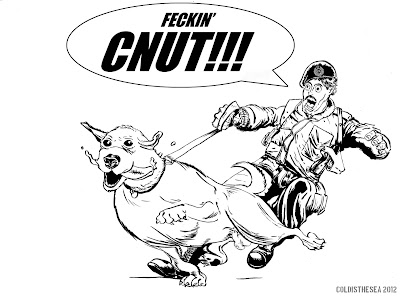 Hm. Where to begin...To explain the phenomena of Stumpy and the Auld Sapper would necessitate an explanation of the phenomena of ARRSE... ARRSE, simply, is "The Army Rumour Service", a forum for former and active British servicemen, well-wishers and those species of civilians known as "Walts", of which I am (sort of) one. The members of ARRSE expound on a wide variety of topics on a daily basis, all of which enlighten the uninitiated about the exotic and arcane mysteries of the British Army.

The legendary "Stumpy" thread ("'KIN 'ELL !! been a bit heavy in here today...so...") started as a trickle of anecdotes about a Royal Engineer dog handler (and his dog) serving in Northern Ireland which then snowballed into a full-fledged book.

These stories...to put it lightly...are absolutely hilarious. For several days at lunch, I sat transfixed in front of my computer screen, absorbing each tale, laughing heartily and occasionally swallowing my coffee down the wrong pipe. The author, Rab Orr has a brilliant comedic voice and I hope that his book receives some attention beyond the confines of ARRSE. (If you want to buy the book, the MLRS site does not offer an order form that works for us Septics, but the staff is extremely helpful and accommodating if you contact them. Thanks David W.!)

So, here's my tribute to Stumpy and the Auld Sapper. There are several inaccuracies in the kit and equipment, but those will be sorted out in due time.