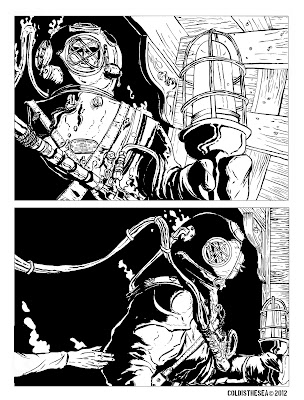 The penultimate novel of the US Navy is Richard McKenna's The Sand Pebbles. For those of you who haven't read it (or haven't seen the movie), it takes place in 1926 China, on the cusp of (and during) a period of upheaval known as "The Northern Expedition".  In this time-frame, Chinese Nationalists lashed out at Western powers and Chinese warlords alike, in an effort to unify the country. The (anti) hero of the book is a sailor whose home is whatever ship he's stationed on. He has an empathy for his engine room and indigenous personnel alike, in radical contrast to his shipmates from whom he becomes increasingly alienated. McKenna wrote it when he arrived on the Asiatic Station, ten years after the events of the book took place. I seem to recall reading a quote attributed to him saying something to the effect of, "All the guys who had been here during the trouble were still talking about it."

I read The Sand Pebbles at the age of 16. It's a powerful and very evocative book. The milieu of 1920's East Asia has a strong allure. Dangerous, exotic, a clash between tradition and modernity. A man could be a man, etc. Who wouldn't want to visit, even if only in their mind's eye? I searched and searched in vain for a similar book. Notwithstanding McKenna's disappointingly brief The Left Handed Monkey Wrench  it wasn't until years later that I stumbled on Delilah, by Marcus Goodrich. Here was another novel, as authentic as The Sand Pebbles, about life in the Asiatic Fleet. The author had run away from home as a teen and wound up enlisting in the Navy at 16.  He later on he went to Columbia for undergrad, became an officer and eventually married actress Olivia de Havilland. As an enlisted sailor, he found himself in the Philippines, and if we are to surmise from a character in the novel similar to the author, a little too smart for his own good. Published in 1941, Delilah is about the crew of a destroyer, from the boilers to the ward room, on the cusp of WWI. Admittedly, some parts of this novel were tough sledding for me. Goodrich uses words that I never knew existed. His characters take some dizzying philosophical flights. None the less, it's a phenomenal novel. If you're a "COIN guy", you might be interested in the fact that Delilah's primary mission was to conduct population-centric counterinsurgency operations in the Sulu Archipelago, where American troops are still involved today. Given that we're leaving Okinawa, our presence in the Philippines may become important again.

Which brings us to Jade Rooster by RL Crossland. Jade Rooster is a novel also set in the same East Asian milieu as The Sand Pebbles and Delilah. The book is ostensibly a "hard boiled murder mystery" that roams between Japan, China, the Philippines and Korea, with an equally compelling enlisted anti-hero sailor (and a cast of comparatively fascinating characters), yet...there's more. The author is a former SEAL, with experience in Vietnam and beyond. This experience counts and enriches the novel significantly. Though he transplants his novel to another time, you can tell that the author understands that fascinating nexus between the spheres of the diplomatic, intelligence and military communities. What's more, Crossland's knowledge of seamanship, diving, martial arts, East Asian history, maritime history and culture, and revolutionary warfare elevates this book above and beyond the mystery genre. Much like reading George MacDonald Fraser's Flashman series, the author's real-life experience in harm's way informs the action sequences of the novel and gives them a realistic feel. All of these characteristics combine to make this a piece of historical fiction that breathes in a way very few other novels do. I was leery at first, then drawn in completely. I couldn't put it down.

The above image was inspired by the novel. Too even describe the context, would provide too many spoilers.Take a look at Crossland's site, Dreadnaughts and Bluejackets. His links section contains articles on Naval Special Warfare that he's written for Proceedings and an op-ed for the New York Times.