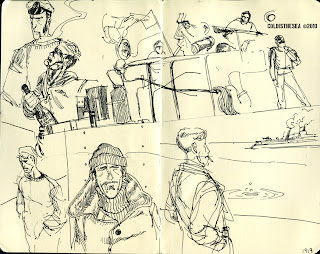 Didn't get a lot of sleep last night, so by mid-afternoon I felt like the walking dead. I had a bit of free-time, and once secured from view, I commenced to doodle.

You'll notice a couple of Guernsey sweaters in there. Being a traditional sailors garment dating back to the 18th century as a uniform item for the Royal Navy, they're made out of "oiled wool", presumably for it's water resistant property. I just ordered one- didn't get the traditional Navy blue version, but Desert Rat-ecru. (Can't have all of my clothing looking like Navy surplus). Hopefully it'll get across the pond soon, because it feels like the snow is getting ready to fly up here.

On the lower right-hand corner is an image inspired by this passage from John Dos Passos' "1919":
"Joe Williams put on the secondhand suit and dropped his uniform with a cobblestone wrapped up in it, off the edge of the dock into the muddy water of the basin...he walked slowly out to the beacon and watched the fleet in formation steaming down the River Plate. The day was overcast; the lean cruisers soon blurred into their trailing smokesmudges."

Having crapped out while reading "Manhattan Transfer", I'm only reading the "Joe Williams" chapters of 1919 (I'm skipping the "camera eye" parts and everything else) so I'm having a great time with it. I'm also rationing it out. I don't want to finish it quickly.

Joe is a great archetypal sailor- his life follows a pattern- he goes out to sea- eventually gets fed up with it- comes back to the beach and tries to get a straight job. But the pull of life at sea is always too irresistible and he always ships out again. The scene above describes his desertion from the Navy in the beginning of the book. Someday I'd like to make that an illustration...apologies to Reginald Marsh.
Posted by Cold is the Sea at 20:46