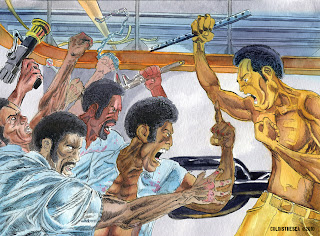 "If you doubt for one moment that I understand your problems, if you doubt for one moment that I am a sincere black man..."...He could see the contempt in their eyes, the way they looked at him with disgust and scepticism.
With a sudden burst of resolve, Cloud reached down to a man...and took his weapon, a heavy piece of steel...
"The first man in this crowd that for one moment does not believe my sincerity, I hold this weapon and I bare my back for you to take this weapon and beat me into submission right here!"
...Cloud stood there for a moment, the weapon held high, his heart racing and his lungs heaving, wondering if one of the sailors would suddenly charge. He knew that if one man attacked, the whole crowd was likely to follow and he would die an agonizing death, right there on the deck of the Kitty Hawk, at the hands of his own men. -From "Troubled Water: Race, Mutiny and Bravery on the USS Kitty Hawk"  by Gregory A. Freeman

One thing I love about a good sea story is that it takes you away from your troubles. It doesn't put your mind on your money woes. It doesn't make you think about politics, health care or "the education crisis". It doesn't make you think about anything real, like military policy in Afghanistan, transnational Takfirist terrorism , or our ascendant peer-competitor, China. It doesn't make you think about anything too aggravating.
"Troubled Water " by Gregory A. Freeman is exactly the opposite of that kind of sea story.
This book cuts to the core of one of America's most turbulent times- the early 1970's, when the anti-war and civil rights violence of the 1960's was still fresh in the American consciousness. In 1972 Vietnam was still raging- even though American troops had been reduced by 2/3 from their peak- and ships like the aircraft carrier Kitty Hawk were still sending in sortie after sortie over Vietnam.
It is often said that an aircraft carrier, due to the size of its manpower (5000 men) is a microcosm of American society- nothing could be truer here. "Troubled Water" details a "perfect storm" of 60's angst (the draft, racism, drugs, radicalism, anti-war sentiment) ,  the decline of military discipline and the strain of an incredibly long, extended deployment aboard the USS Kitty Hawk.
Gregory Freeman writes that in the early 1970's race riots, radical activism and sabotage against military equipment- especially anything headed to Vietnam- were increasing in frequency within the US military. Aboard the Kitty Hawk anger over real and perceived racial incidents fueled an explosive atmosphere which erupted as the Kitty Hawk  cut short a much needed port call in Subic Bay to head back to Yankee Station.  Still tense over a racial incident which evolved into a riot in Subic, many (but not all) African-American crew members aboard the Kitty Hawk became worked up to the point where they picked up improvised weapons (everything from fog foam nozzles to tie-down wrenches) and started roaming through the ship severely beating any white sailors they came across- including those in showers, their racks or in sick bay- which was assaulted en masse several times throughout the night. Some sailors were beaten so seriously that they had to be medevac'd into Vietnam for treatment.
On the military side of things, the book is a study in the failure of the unity of command. The riot evolved slowly and sporadically. Information was spotty, and communication between the Captain, the XO (LCDR Benjamin Cloud pictured above) and the officer of the Marine detachment, was non-existent during the crux of the violence.  So naturally, rumors flew and panic mounted. Officers were missing or not at their appropriate stations. Orders were given and countermanded over the 1MC. No plan had been created for this contingency, so none was implemented. Chaos and confusion reigned aboard the Kitty Hawk.  During the heat of the riot, some African-American crewmen voiced their intent to take over the Kitty Hawk and sail it to San Diego.
Mutiny you say? Definitely not, says the Navy. Since they were unsuccessful I think this only qualifies as an "attempted mutiny". Still- the Navy downplayed and buried the incident- as did the other services. "Chickens coming home to roost" after a couple hundred years of slavery, segregation and racist violence perpetrated against African-Americans? Most likely.
There's a lot more I'd like to say about "Troubled Water". Robert McNamara's Project 100,000 was also a factor in the Kitty Hawk riots, but time does not permit to muse on this anymore tonight. If you were in the military around this time, or have any reminiscences about racial incidents during the Vietnam War-era, please leave them in the comments.
Posted by Cold is the Sea at 21:09