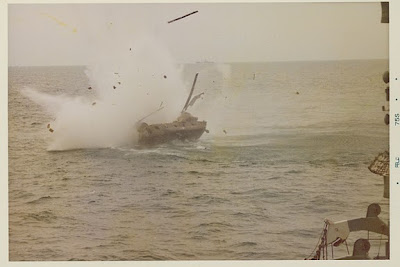 Boy was I shocked and surprised today to hear NPR do a story about the role of the USS Kirk in the evacuation of Vietnam...I would love to do a little art for this, but time does not allow and my eyelids are heavy...Fascinating and poignant sea story there. I was also surprised to hear about the role Richard Armitage played in directing the rescue of RVN Navy personnel and their families. Listen to the NPR story- especially this segment- and learn what happened to the pilot of the foundering Chinook featured above after it smacked into South China Sea.
Posted by Cold is the Sea at 21:08