A History of the Gadsden Flag

This is a joint venture conceived by Monkey Fist (of Maritime Monday fame), written and photographed by Tugster (Will Van Dorp) and illustrated by yours truly.

Let's let the Tugster take it away:

Below is an example of the flag, flying over a great coffee, beer, and lunch place up in Cold Spring, New York (across the river from West Point) . 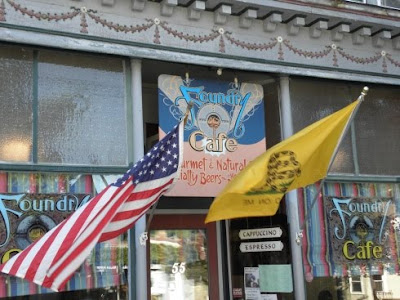 These yellow flags with rattlesnakes you may have started seeing everywhere. . . they are not new. I trace them back to the contrarian from Pennsylvania who played with lightning, yes … Benjamin Franklin. He also extolled the health benefits of skinnydipping and created bifocals, without which we older folk couldn’t exist. His wit generated such gems as “fish and visitors stink in three days” and “beer is evidence that God loves us.”

Franklin liked rattlers, even proposed they become our national symbol because they were honorable beasts who –if they felt tread upon—would communicate, would rattle a warning of an impending strike if said-treading continued. Before the “French and Indian” War (1754—1763), Franklin published a quite famous political cartoon featuring a rattler chopped into eight pieces with the caption “Join, or Die,” probably an earlier draft of his aphorism: “we must hang together or we shall hang separately.”

The next North American war saw colonists fighting the British Empire. The first commander-in-chief of the fledging “colonist’s navy” was Commodore Esek Hopkins. By then, the rattler flag (a version that had an uncoiled rattler superimposed onto a red-white striped field) had gained the support of Continental Colonel Christopher Gadsden of South Carolina. In 1775, Hopkins was instructed to use the flag to signal an engagement with British warships on the Delaware River. As such, it became the first Navy Jack. The rattler symbol also decorated the drums carried by the five companies of Marines in Hopkins’ fleet.

In 1980, the rattler flag took on new significance as a result of the directive from the Secretary of the Navy that the flag be flown by the naval vessel in longest active status.

The August 31 NY Times ran an article about Andy C. McDonel, who was told by the Avalon Village Community Association that he could not fly the rattler flag. This is a non-story, I think: community and neighborhood associations everywhere enforce charters or covenants about such things as how many cars can be parked in a driveway or what hues of which colors you may paint your house. They can tell you you’ve planted the wrong flowers or cannot grow corn in your garden! 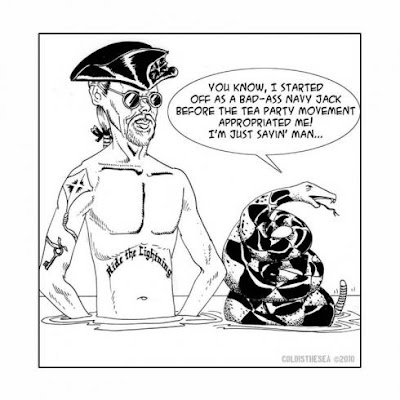 What’s not discussed though a strong undercurrent, it seems, between McDonel and the Community Association is the new set of associations the flag has taken on, as the appropriated symbol of the “Tea Party” movement, which explains why we’re seeing it so much these days.

That’s how it is with symbols; with time, they acquire new associations. I have a yellow t-shirt with a rattler. I used to wear it partly as tribute to the First Navy Jack and partly as reflection of my years in libertarian New Hampshire. I think I might retire it for awhile. And given my admiration for Franklin, I might just find one with a turkey, the beast he wanted to see as our national bird. Either that, or—much more fun– I’ll pay my tribute to Franklin and go dipping skinny.

Cold is the Sea, here. By the way, I just couldn't let the opportunity pass to link you to Kate Beaton's excellent take on Ben Franklin's conception of the Gadsden flag's predecessor, the "Join or Die" political cartoon...