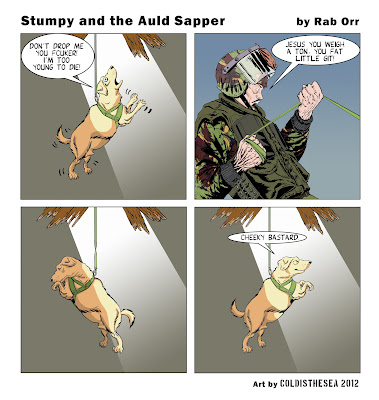 “There is one other reason for dressing well, namely that dogs respect it, and will not attack you in good clothes.”
― Ralph Waldo Emerson

But let's start on a more philosophical note.

The bond between a man and his dog is perhaps unlike any other. Profound minds across the centuries from Martin Luther to Mark Twain to Edward Abbey have often cited mutual dependence as the foundation of this phenomenon, and perhaps it's true. However, adjacent to the simple relationship between a man and his pet, is the "working" relationship. In a military context, dogs perform a variety of functions- guarding prisoners, detecting weapons and explosives or tracking. (In the parlance of the British military, dog teams with those skill-sets are respectively known as "Snappers", "Wagtails" and "Groundhogs".)

The bond between a soldier and his soldier-dog is more intense than that between a man and his pet. While virtually every pet owner I personally know respects their animals and cares for them deeply, military dog-handler teams- especially those deployed to conflict zones- endure significant danger, stress, hardship and violence, which creates a different kind of connection.

"Stumpy and the Auld Sapper" is a memoir about two soldiers, one of whom happens to be canine.

Despite the serious build-up in this review, this is a funny book. Uncontrollably laughing out loud, nearly pissing yourself, coffee coming out of your nose, funny.  Rab Orr is a natural. Reading his book makes you feel like you're sitting in a bar, with a Veteran who keeps you riveted with his war stories. The punchlines either make you shake your head in disbelief at the ridiculousness of it all, or laugh 'til you cry (which I did at least a couple of times). It is a profane book however- and if you have delicate sensibilities, I recommend avoiding it.

Officially a work of "fiction" (I assume to protect the guilty), the narrator, The Auld Sapper (a Royal Engineer by cap badge) tells of his time in the Bandit Country of County Armagh, NI as one half of a Wagtail team seeking out weapons and explosives with the aid of his half-pit bull, half Yellow Labrador, Stumpy. The pair endures all types of folly, and not a little bit of danger, with humor, stoicism and humility.

I think the genius of this book is Stumpy's voice. Admit it. If you've ever had a close relationship with an animal, you've often imagined what they were saying at any given moment. Rab Orr brilliantly demonstrates his comedic chops by articulating Stumpy's voice and personality. You will come to know and love The Stump.

The rest of the comedy is provided by the British Army and the nature of conflict in general. This book is not a madcap," M*A*S*H-style" send-up or satire. It's funny because you can really imagine these things happening. And it's not all shits and giggles either. If you enjoy military memoirs that lack bombastic Rambo-style action (even though the SAS does make an appearance), I highly recommend this to you.

As for the Emerson quote at the beginning of the review, once you read the book, you'll appreciate it. "Stumpy and the Auld Sapper" is available from MLRS books in the UK.