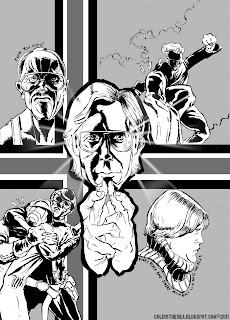 (click to enlarge)
After I wrote the bulk of this review I found a piece with a similar structure, using an American political figure to illustrate the plot of “Norwegian Ninja”. That piece is here. I debated changing mine, but I believe my analogy is more apt, so I’m keeping it. Enjoy:


Ok. Speaking to my fellow Americans, imagine this for the plot of a movie:


It’s 1985.  Chief Warrant Officer John Anthony Walker, a sailor in a sensitive communications billet for SUBLANT (Submarine Force Atlantic) is being arrested for one of the worst acts of betrayal (if not the worst- and certainly the one with the largest possibility of mass destruction) in American history. For 17 years he has been giving away classified information to the Soviet Union for filthy lucre. Through Walker, the Soviets have gained so much knowledge about our submarine capabilities, they have been able to engineer a new class of boat- able to outfox ours -and as a result, redress the imbalance (skewed towards us) in nuclear warfare capability. They can now sneak around our underwater defenses and put missiles closer to our shores than ever before.


Following me? It’s a movie plot. Stay with me.


Ok. Here’s where the movie gets weird…John Anthony Walker turns out not to be a traitor- but a patriot. For years he has been leading a clandestine force of ninja held in readiness to engage in secret combat against those who would threaten the American way of life. In this case it is a shadow army of villainous men who would dubiously lead us into war to maintain global hegemony. (You caught the part about the secret Ninja force, right?) So, in this movie, why does our "hero" Walker end up in jail? Well…to tell you that would be a spoiler, but it’s a necessary part of the plan.


Got it? Sound like a good flick? Something you’d see?