Those of you who know me well, know that I have a t-shirt problem. I love t-shirts. I have mounds of t-shirts from all over the world. From shit-hole punk rock bars in NYC to the US Embassy in Saudi . However, a quick survey of my closet reveals that the "maritime pile" is the largest, so you can imagine my delight when I espied this "Arctic Convoy" t-shirt (below) from Philosophy Football. Their range offers t-shirts celebrating everything from  Mario Vargas Llosa, to William Blake's Jerusalem.
Considering that I had an Uncle who was a Merchant Marine during WWII, the shirt below has an extra special place in my heart. All of you real, former or armchair sailors, seafarers or seamen, check it out:
ARCTIC CONVOY 70th ANNIVERSARY T-SHIRT
When Hitler invaded the USSR on 22 June 1941 the response of Britain and its allies was almost immediate. Crucial supplies were provided via the Arctic convoys. The first of which, 'Dervish', left from Iceland on 21 August arriving in Archangel ten days later. This superb anniversary T-shirt depicts HMS Halcyon which provided part of the naval escort and lists all the Royal Navy and Merchant Navy ships plus solitary Dutch vessel which formed this first convoy. Available from www.philosophyfootball.com 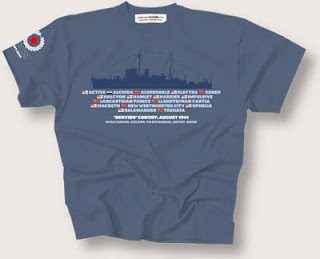 Full Disclosure: I got a free t-shirt for writing this post. I'm actually wearing it right now. It's a VERY cool tee.
Posted by Cold is the Sea at 16:47