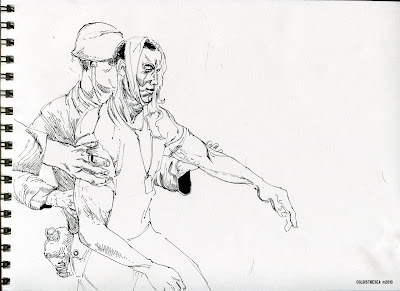 I've been tearing through Karl Marlantes' Vietnam novel "Matterhorn", which set my mind and pen wandering to draw this sketch. (This is taken from Larry Burrow's Pulitzer Prize winning photo taken atop "Mutter's Ridge" in 1966.) Having read a ton of Vietnam novels in my day, I can offer the informed opinion that "Matterhorn" is one of the best Vietnam novels, if not one of the best war novels ever written. There's no hackneyed patriotism or testosterone fueled chest thumping manly action. The bravery and heroism displayed in the book are demonstrated by men who simply survive horrific, grueling conditions that are sometimes (often) created by the whims of the 'politically' ambitious.

A poster on Terminal Lance (who I assume knows from whence he speaks) says that the novel could have taken place during our current war, implying that the more things change the more they stay the same. Indeed, Marlante's publishers urged him to change it and make it about Iraq or Afghanistan.

What makes it unique from most Vietnam fiction is that racial tension is one of the main drivers of the story. (Marlantes says that in early drafts he tried to avoid it but couldn't.) In James Webb's Fields of Fire (which I consider to be the best novel about Vietnam), racial issues create some of the conflict, but not to the extent they do in "Matterhorn". I chose to sketch the image above, because it exemplifies how Marines in line units transcended racial friction- even though Marlantes says that once they were out of the field, that same tension became impossible to ignore.

There are parts of the book which are grueling and exhausting to read and make you wonder how anyone could have survived. Very little war literature (with the exception of "The Thin Red Line") approaches the vivid detail and intensity in which the suffering sustained by Marlantes' Marines (and Sailors) is illustrated.