Cold is the Sea: THE NOVEL (and a little TMI) 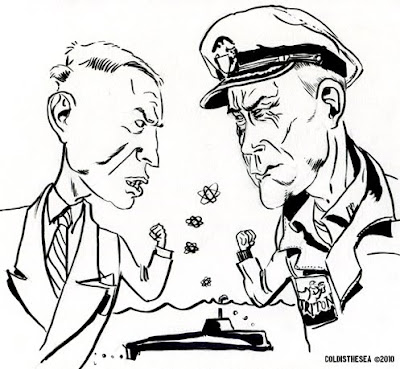 A few years ago I read Captain Edward L. Beach's novel, Run Silent, Run Deep. Loved it. Not only a page turning classic WWII novel, but how many men have actually experienced war beneath the waves and lived to write about it? So, you can imagine my excitement when I ran across the sequel, Dust on the Sea in a flea market in Red Bank, New Jersey? ...Now, imagine my disappointment when the book took on the turn of a "Boy's Own" adventure and just became so unbelievable I couldn't really get into it.

Fast forward a couple of years and I find out that Captain Beach wrote a third sequel to the Run Silent/Dust-on-the-Sea series, a novel called Cold is the Sea...I am reluctant to read it because Dust kind of sucked...but the title is so catchy...it sticks in my brain and eventually I begin to use it as my nom du guerre (nom du art?) for this incarnation of my sketch blog.

PRESENT DAY: A few days ago I had finished my serious book (Koran, Kalishnikov and Laptop), my bedtime book (Shadow Divers) and my gym bag book (Lord Jim), and lo and behold I needed something to read.

Now, this confluence of book-finishing transpired on an especially humid, miserable hot day (not DC humid-miserable, but close) and the cover of Beach's Cold is the Sea, with a submarine breaching some sea ice seemed so...inviting... I figured that the time had come to read the novel that I had named myself after. I would just grit my teeth and grind through it...but soon I found out I was reading a gem.

So far (and I'm only about 60-some odd pages in) the novel appears to be a fictionalized account of Captain Beach's pissing contest with the famously irascible Hyman G. Rickover. For those who don't know anything about Rickover, he was the father of the nuclear navy (i.e., the singular driving force that got reactors on subs)- and apparently a very "prickly" personality. Prickly like a steel brush. (Read Sherry Sontag's Blind Man's Bluff for more about Rickover.)

From what I can tell, Beach and Rickover had a little clash of egos. Rickover was the Engineer. Beach was the WWII Hero Sub Ace. Rickover was born in a Polish shtetl that was the target of pogroms. Beach was an Academy ring-knocker and the son of a Naval hero. This book is kind of like reading about a star quarterback complaining about the valedictorian math nerd.

"Ok", you say, "that sounds incredibly boring." But not to me! I love this shit! It's actually kind of funny, though Beach obviously had an axe to grind- although to his credit he does grudgingly acknowledge and praise the contributions Rickover made to the Navy.

As I said, I don't know the whole real story- or Rickover's side- but so far it's good reading. I do know that the rest of the novel is based on Beach's experience commanding the first nuclear sub to circumnavigate the globe completely submerged (Operation Sandblast). The caricature above (l to r: Rickover, Beach) kind of sums up my impression of their relationship so far...
Posted by Cold is the Sea at 20:09